How to Tame a Toddler Meltdown

Day 21-11:15 pm: This was an amazing day! We spent the day at California Adventure next to Disneyland! We had the best time. But, I’ll talk more about that later. What I want to talk about is what happened the night before, when our toddler had the craziest meltdown on the history of toddler melt downs. I thought our child was possessed.

It all happened during a long drive….

We had been driving for a while. My hubby had to work so we didn’t leave until 2:00 (nap time) and had a long 6 hour drive ahead of us. We thought that our toddler would just nap on the way.

Boy were we wrong.

First things started out great. She played quietly with her toys in the back. We stopped and she used the potty. We got her some French fries. She was happy just eating and looking out the window. But we knew she hadn’t napped.

So we gave her the tablet. It had a few downloaded shows on it so that kept her happy. She had fallen asleep with it I her hands before, but not this time. So we kept driving. Stopped again. Fed her more. Gave her the iPhone.

She was so tired but every time she would almost doze off, she would wake herself up. It was like she was purposely trying to keep herself awake. Seesh! I stared at her for a good 20 minutes trying to use brain power to will her to go to sleep. Still nothing.

It was almost 6:00 and she was getting tired. And cranky. We still had 2 hours to go! She started to cry for “milksies” (she nurses to sleep for naps). I obviously couldn’t give it to her because we were driving. So I tried to distract her but nothing worked.

So we stopped again and I gave her some milksies. Then she was fine as we got on the road. But soon, the crying started again. This time louder and more intense. She wanted out. We only had 30 minutes to go, but she was freaking out so much that we had to stop. I got her out of the car seat and nursed her some more. She fell asleep. But we were in a parking lot and only had 30 minutes to go!

We foolishly put her back in her car seat and she woke up. That’s when the sh*t hit the fan.

I’m talking exorcist style. Complete out of body experience. She wanted out. She was screaming, kicking, flailing her head against the seat, scratching herself, scraping me, pulling her own hair. I had to hold her arms so she wouldn’t hurt herself.

My hubby was driving and he didn’t know what to do. We had never seen this behavior before. He started yelling at her to stop. I tried to remain calm and distract her with toys, shows, whatever.

I spoke with her in a calm tone. I said, “I understand you want to get out. We are almost there.”

It felt like it lasted hours, but it was probably only 10 minutes.

Then she started to calm down slowly. She was distracted by a show I put on. I was running her head. I was taking deep breaths. I was trying to be calm for her.

Then I got out her favorite thing, Play-doh. Once she started playing with that it seemed to soothe her. Kinda like a stress ball adults use. The soft squishy dough relaxed her. Finally that along with the show, calmed her down and she was completely fine for the rest of the 20 minute drive.

When we got there it was like its never happened. She was completely fine. So next time your toddler has a freak out moment, just remain calms. Yelling or shouting will only make it worse. Stay calm and give them distractions. 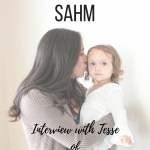 Stay Sane as a SAHM Interview with Tesse from Millennial Housewife

How to Have Fun as a Mom and Dad